To erase all past, present and future witches from existence

Aoi Yuuki (Japanese)
Christine Marie Cabanos (English)
Joy Saltarelli (Italian)
Lydia Morgenstern (German)
“If someone tells me that it's wrong to hope, I'll tell them that they're wrong every time.”

Madoka Kaname (鹿目 まどか Kaname Madoka?) is the main protagonist and the titular character of the Puella Magi Madoka Magica TV series. She is a shy and kind girl who cares deeply for her friends, but has low self-confidence. After becoming a magical girl, she gains more confidence in herself and her actions.

Madoka is seen to be a very kind girl who attempts to help and comfort anyone to the best of her ability, but is also shown to be quite timid. Madoka believes that helping others is the only thing she can offer to the world. Madoka is easily flustered, and can often be manipulated through her desire to help others. As a Magical Girl, however, Madoka retains her original personality, though is noticeably more confident with her actions. Madoka often tries to understand others, even if it doesn’t end well. She’s often anxious, scared, and usually doesn’t fully understand the whole situation, but even so, she attempts to do what is right.

Madoka is noted to speak politely with others, often referring to the same sex as ‘-chan’ or ‘-san,’ and the opposite sex as ‘-kun,’ somewhat indicating that Madoka is eager to get close to other people, with the exception of Kyousuke Kamijo, as Madoka believes he could someday become Sayaka Miki’s boyfriend.

Madoka Kaname has pink twin tails and pink eyes. When down, her hair is almost shoulder length. She has choppy bangs that are pointed and chin-length, framing her face.

Appearance in the School Uniform

Madoka's school uniform, which matches the others' uniforms of her age, is a light tan blouse with a black plaid skirt and white thigh high socks with a pair of brown shoes. Madoka also wears two red ribbons in her hair, which hold up her pigtails.

Appearance as a Magical Girl

Madoka wears a puffy pink dress with two bows arranged at either side of her skirt. She sports two bows in her hair, supporting her twin-tails, as well as a red ribbon around her neck, which is tied in a bow in the back. The front of her torso has a pale yellow segment surrounded by white frills with a white placket running down the center, decorated by five red buttons. She has two small straps that connect from the front to the back of the dress over her shoulders, and short, puffy sleeves with frilly ends. In between her shoulder blades and just below her neck, there is a heart-shaped hole in the back of her dress. Her skirt's ends are akin to a flower's petals; there are seven separate petal-shaped segments of her dress, which are all decorated with a red edge and three white teardrop-shaped designs, lay atop a big, white petticoat, which is notably frilly underneath. She also wears a pair of white gloves with pink trims around the wrists, white, knee-high stockings with frills just below the knee, and red, heeled shoes with ribbons tied behind them.

Appearance as a Goddess

Madoka, upon becoming the Law of Cycles, grew very long pink hair and kept her small twin-tails on the sides, which are held up by large, white bows, rather than her usual red ribbons, which, she gave away to Homura as a gift to remember her by before she became the Law of Cycles. Her eyes also changed color. Rather than pink, her eyes became golden, and her pupils became lighter in color.

She wears a long, white, three-layered, frilly dress, which is shorter in the front, and gets increasingly longer nearing its end. The first two layers are purely white, and the final layer beneath the two is a light purple-y pink hue. Her collar is wavy and wide-cut and splits down the middle all the way to just below where Madoka's ribs would be, and is kept together near the beginning of the split by Madoka's soul gem, accompanied by what looks to be two smaller soul gems on either side. Her sleeves go down to just above her elbow, and are airy and wavy. There are two layers to them, with the layer underneath it being purple-y pink. She also wears white gloves, similar to those worn in her initial Magical Girl form. Underneath the multiple layers of her frilled dress is what appears to be a reflection of the Universe, complete with glittering stars and deep, dark, purple-and-blue hues. Her stockings are baby pink and reach up to her thighs. She wears white pumps with a single wing on each side of ankle. 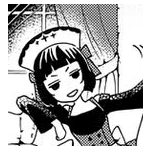