I First Met Her in a Dream... Or Something

夢の中で逢った、ような… (kanji)
Yume no Naka de Atta, Youna... (romaji)
I First Met Her in a Dream... Or Something (English)

I First Met Her in a Dream... Or Something (夢の中で逢った、ような… Yume no Naka de Atta, Youna...?) is the first episode of Puella Magi Madoka Magica. It originally aired on January 7th, 2011 in Japan and is produced by SHAFT.

The episode begins with Madoka Kaname's dream of Homura Akemi fighting Walpurgisnacht from another timeline. Madoka wakes up and goes to school. At her school, she finds that a new girl has enrolled in the class, Homura Akemi, and Madoka is surprised that Homura seems to know her and she is looking at her. Homura asks to go to the nurse, and she takes Madoka with her. In the hallway, Homura says Madoka should not try to change her life.

Madoka and Sayaka are at the store, and then Madoka hears Kyubey's voice inside her head. She hears her calling for help. She follows it to find Homura trying to kill Kyubey. Homura states that it is none of her business and she should just hand Kyubey over. Sayaka then appears to spray Homura with a fire extinguisher and helps Madoka.

The two are caught in a barrier while fleeing. However, they are completely unaware that it is a barrier, and they are very scared. Mami Tomoe appears and saves them, and Homura leaves. Mami heals Kyubey and Kyubey says that Madoka And Sayaka can become magical girls if they form a contract. 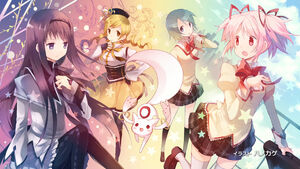